I’m going to throwing around a lot of technical terminology in these posts, so if you get lost, check out below for definitions!

Vocabulary
Block – excavation area composed of multiple connected units
BP (years “before present”) – the archaeological standard for conveying time with the “present” being 1950, the approximate date of the discovery of the radiocarbon dating technique; “cal BP” means “calibrated” or “calendar” years before present, a more accurate dating that takes into account fluctuations in carbon levels in the atmosphere
CVS – Constant Volume Sample; 100mL bags of dirt taken once in each quadrant of each unit for every level as well as for features and floor sediment; used for geochemical analysis
Datum – a nail or piece of rebar at a know point in the 3-D grid placed over the site; used in measuring depths within the excavation blocks – depths are taken for every artifact found in situ and at each corner and the center at the top and bottom of every level

Mariah using a string attached to a datum (hidden behind her) to measure the final depth of her unit.

Debitage – a.k.a. flake, a piece of stone leftover from the making of stone tools; most common find at SNAP
Feature – non-portable artifacts that cannot be removed from the ground without altering or destroying their original form (e.g., housepits, burials, hearths, post holes); usually identified by discolored soil, often in a circular shape (depending on the feature)
Flake – a.k.a. debitage; a piece of stone leftover from the making of stone tools; most common find at SNAP
Groundstone – pretty self-explanatory, a stone that has been purposely ground through repetitive use or in preparation for use; examples: grinding stone for food preparation, hammer, axehead
Housepit – a typically ovular or circular depression in the ground that was once dug out to form the bottom of a pithouse
Humic layer – a.k.a. Stratum I; surface layer of undecomposed organic matter including leaves, roots, branches, and dark brown to black soil
In situ – “in place;” what an artifact is called when it is found in its original place in a unit instead of in the screen
Level form – filled out by the excavator for each level telling what was excavated, mapping large rocks and roots, and listing any artifacts found
Lithic – referring to rocks, particularly those altered in anyway by humans; “Lithics” is commonly used to refer to lithic artifacts (which include stone tools, flakes/debitage, projectile points, groundstone, etc.)
Loose dirt – call for the end of the excavation day; screen your final bucket, cover your excavation block, and pack up to leave
Munsell chart – a book of charts used to systematize color identification of soils for recording on level forms and stratum descriptions; Housepit 7’s is frequently referred to as Fred for the name on its cover

Using Fred the Munsell to identify the color of some soil

Pithouse – a semi-subterranean winter dwelling for Sinixt and other indigenous peoples of the Northwest; the pit would have been dug out, then a conical roof would have been formed above it from posts, branches, and finally dirt piled on top; an artist’s rendition:

A reconstruction of a pithouse by archaeologist and artist Eric Carlson

Podzol layer – a.k.a. Stratum II; decomposed organic material just below the humic layer; very fine-grained silty sand, grey to white in color at SNAP
Provenience – the original position of an artifact, feature, etc.; recorded horizontally and vertically or by quad and depth when an artifact is found in the screen
Radiocarbon dating (or C14) – a method of dating based on the decay rate of the isotope carbon-14 stored in organic material; most common method used for dating archaeological site; at SNAP, most radiocarbon samples come from charcoal pieces
Screening – sifting a bucket of dirt through 1/4 or 1/8 inch screens; the screens are where most artifacts are found because of their small size 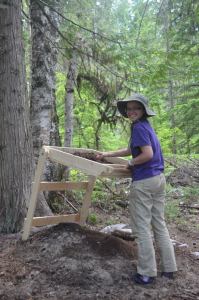 Sinixt – a.k.a. Lakes people; an indigenous tribe whose territory traditionally stretched from north of Revelstoke, British Columbia to Kettle Falls, Washington; declared extinct by the Canadian government in 1956 but still recognized in the United States as part of the Colville Confederated Tribes, struggling to reclaim their existence and their land in Canada
SNAP (Slocan Narrows Archaeological Project) – an ongoing archaeological research project run by Hamilton College with partnership from Selkirk College in the Slocan Narrows region; site of Sinixt pithouse villages ranging from 3105 – 119 cal BP (1155 BCE – 1831 AD); work site for Hamilton and Selkirk Colleges’ archaeology field school
Spec in – record all of your artifacts, CVS, and radiocarbon samples in the appropriate log books and give them SPEC numbers (no, I don’t know what “SPEC” actually means for some reason)
Stratigraphy – the order and relative positioning of strata (see “Stratum”); study of the layers of dirt used to inform archaeologists about the relative time and positioning of artifacts
Stratum – a distinctive layer of sediment (or rock); pl. strata
Stratum III (or cultural layer) – the occupational stratum at SNAP; yellowish brown silty sand at SNAP
Survey – the methodical search for something on a landscape; in archaeology, survey often involves a line of people walking together and looking for potential artifacts or sites
Total station – a.k.a. Fatty Dank, at SNAP; combines an Electronic Distance Measuring Device and a theodolite to measure horizontal and vertical angles, slope, and horizontal and vertical distances; used to impose a 3-D grid on a site and measure the placement of datums for provenience in a block; works by shooting a laser beam from a known point to a prism positioned above an unknown point, the distance is then calculated based on the return time of the laser and the angle of the laser is used to determine depth

Fatty Dank with the prism (a.k.a. Idiot Stick) in the background
Photo Credit: Mike

Triangulation – the method of forming a perfect (or near perfect) square from a single point by first measuring the specified amount of meters due north and placing a stake there, then finding the other two corners from the hypotenuse and side length of the first two points (it’s hard to write out but it’s actually pretty simple in practice)
Unit – primary excavation area within a block outlined by string; typically 1m x 1m or 2m x 2m; often divided into quadrants for better control of provenience; labelled by the coordinates of the SW corner
XRF – X-Ray Fluorescent machine; bombards objects with x-rays which ionizes their atoms, causing the objects to emit radiation that is distinctive of the elemental composition of the objects; used in archaeology to match lithic tools to their original sources; in the field, we use a portable, but less accurate XRF machine than the large ones in the lab 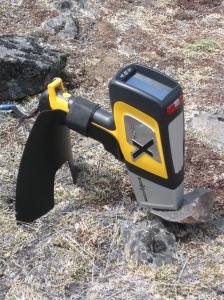 One of our portable XRF machines

A Typical Week:
Monday-Friday: Dig
Saturday: Trip into Nelson for laundry and shopping, free time in the evening
Sunday: Free time or a make-up day if other activities interrupted our digging earlier in the week

One thought on “Vocabulary”