Day 41
July 18th
(Journal Entry from July 19th
7:08 p.m. Central Time
Flying)
This morning we woke up bright and early for our usual 7:15 a.m. breakfast, and then headed back up to the field to finish packing.  I have got to say, taking down a tent is not nearly as fun as putting it up, especially when everything is still wet with morning dew.  We had aimed to leave by 9 a.m., but of course, that didn’t happen.  We said our (tear-filled on Petra’s part) goodbyes to Mike, Allysa, and Molly and hit the road about 10 o’clock.  The border crossing was very easy, and about 3 p.m. we rolled into a Mexican restaurant in Spokane, Washington for a hearty and tasty late lunch.  We said farewell to Nathan, Alissa, Mancos, and Lodi at the hotel.
Max, Grace, Petra, and I soon decided it was pool time.  The water slide was actually open this time, and despite our initial misgivings, we had way too much fun for college students sliding down over and over again.  Later, I joined Emily, Rachel, and Max for a game of Settlers of Catan, my first on this trip.  Emily and I were both only one point away from defeating Max, the Catan master, but much to our disappointment, he beat us to it.  I still think I did pretty well for it being only my third time or so playing altogether.  Petra, Rachel, and I finished out the night watching Harry Potter and the Chamber of Secrets, frequently interrupting with sarcastic comments and questions about the logistics of the magical world.

Day 42
July 19th
7:08 p.m. Central Time
Flying between Minneapolis, MN and Grand Rapids, MI
I am almost home!  It’s hard to believe that I’ve been away for six weeks – it seems so much shorter!  I have dug up an elk pelvis, crossed the U.S.-Canada border four times, seen a bear, stuck countless dirt-covered rocks in my mouth, and absorbed significantly more DEET than could possibly be healthy.  Perhaps most importantly, I am still interested in pursuing archaeology as a career… though maybe more in the lab than in the field.  But no matter what comes from it, I am very happy to have taken part in SNAP 2015, doing some important work with some wonderful people.
Okay.  Enough cheesy stuff.  Let’s get back to narrating what has actually been happening.  Maddy, Rachel, and I caught our flight to Minneapolis together at 1:30 p.m..  The flight was pretty uneventful.  I had hoped to get pictures of the mountains this time but it was cloudy beneath us when we passed them so no luck.  I said goodbye to my dear Clinton friends after we landed, with promises to set up a SNAP reunion whenever their breaks conveniently do not coincide with Hamilton’s.  I believe we are just starting to cross Lake Michigan now.  So close to home! 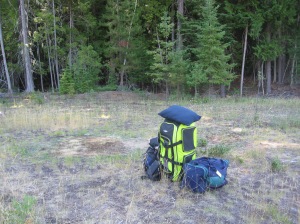 All my stuff packed and sitting where my tent used to be.

The field looks so empty without 12 tents! 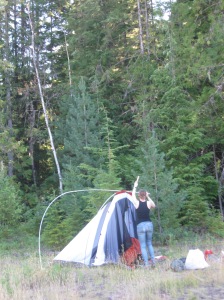 Petra taking down her Kingdom 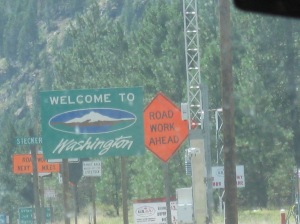 An amazing sculpture at the gas station we frequently stopped at in Kettle Falls, Washington of a Native American salmon fishing

Up in the air 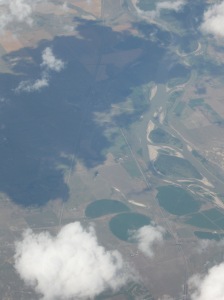 The real crop circles of Washington/Montana!

They don’t call Minnesota the Land of Ten Thousand Lakes for no reason!

Nothing more beautiful than flying over Lake Michigan at sunset, looking at home near Michigan’s shore.

Well, that concludes my account of my adventures in British Columbia with SNAP 2015.  Thank you to everyone who has followed along the whole way as well as those who have only recently joined or have only read the exciting sounding parts (I don’t blame you)!  I have a few more short posts planned for updates on my archaeological adventures post-SNAP, and who knows, maybe I’ll get asked to take The Ring to Mordor sometime in the future and blog that! But this is indeed the end of the “formal” (a.k.a. journal) part of “I’m Going on Adventure!”.
Thanks again for reading!
Mariah