Day 39
July 16th
(Journal from July 17th
3:57 p.m.
SNAP)
Today was simultaneously the best and the worst day of excavation; the best because we are finished and will be going home soon, the worst because it is also sad to leave and we had to lug buckets of dirt back from the screening piles to backfill the blocks.
I started the morning by helping to photograph and backfill Housepit 8 with Rachel, Allysa, and Lindsay while Molly and Mike finished profiling and Emily and Anna finally finished up the feature.  After an early lunch, most of the group scanned the riverbank for washed out artifacts while I filled out some more unit summary forms
More from July 19th entry
Looks like I got distracted as I was writing about backfill day so let’s pick up there.  Once the profiles were completely finished for Housepit 7, the backfill process started all over again.  We laid down a few pieces of plastic and secured it with rocks and sticks poked through and into the ground.  Then we dumped a layer of dirt on it.  The buckets are pretty abusive when full – the front of my thighs are splotched with bruises!  Soon after, we began to fire-at-will with the many excavated rocks piled on the sides of our block.  The real trick was to avoid hitting Nathan and the other bucket-bearers.  There was something cathartic about throwing all those rocks back in, as if I was finally getting back at the block for all the rocks and other hardships it had given us.  Once most of the rocks were in and the dirt made the pit look like a bowl again, the original members of the Housepit 7 team dumped the last bucket together.  The process was completed by placing freshly cut branches over the bald spot in a poor, but well-meant, attempt to disguise our presence.  Finally, we were done.  Feeling a bit like survivors of the Dust Bowl from all the blowing dirt, we wearily trudged back up to camp for the last time, sustained and rejuvenated by the thimbleberries we picked along the way.

Day 40
July 17th
3:57 p.m.
SNAP
And we’re down to our last full day in Slocan.  Despite a very chilly night and morning, it has warmed up to be an absolutely gorgeous, sunny day.  After a late start, we worked in teams to inventory and pack away camp and site supplies, deconstruct the outhouse at site, and clean and organize the kitchen.  Then we had a last lunch of leftovers.
After lunch, Mike, Anna, and I put the finishing touches on our poster about Housepit 7.  Everyone also helped to take down the big tent covering the dinner tables.  It looks so strange without the massive thing now.  I then headed up to my tent to begin the packing process.  Now I am back at the cabin, waiting for the final festivities to begin.
More from July 19th
Moving forward to the “party,” Lori Barkley, the sole anthropology professor at Selkirk and her husband joined us for pizza and presentations.  It was interesting to hear more over dinner about Marilyn James’ viewpoint from Lori who has worked closely with the outspoken Sinixt activist in her studies and remains in her relatively good graces.  The poster presentations went smoothly enough.
Afterwards,  the TAs presented each of us with “awards” written on “rocks with intrinsic value” (as Molly would say).  My award was “Secret Popstar” for my habit of singing along quietly to any song I even vaguely know during our car rides.  Following the awards, Mike entertained us with a bloopers slide show of funny pictures that had us in stitches.
I stayed around the “fire” (we just had a propane lamp in the middle of the fire pit because of the fire ban) until about midnight.  Emerging into the field, I stopped in awe, looking up at the stars’ splendid decoration of the sky.  It was strange to see stars right on the horizon of the mountains, touching them like two pieces of fabric laid against each other.  It was a perfect night to end on, as if the sky had donned her best party dress to celebrate with us. 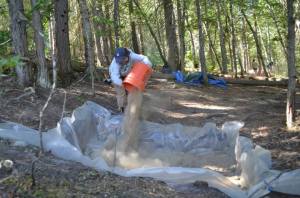 Dumping the last dregs of the dirt into Housepit 7
Photo Credit: Allisa 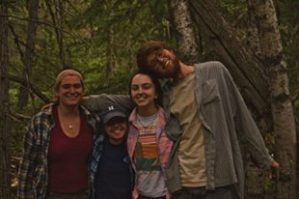 The tables without the big tent!