Day 37
July 14th
9:40 p.m.
SNAP
The rain continues.  It rained at least twice last night.  I woke this morning to grey skies and fluffy clouds hugging the mountains like a feather boa (despite that simile, it was really quite grand and beautiful).  We headed down to site for our “last” day of excavation.  I began the day by working with Molly to define, map, excavate, and profile my feature.  It ended up extending farther than I had thought, even dipping under the floor.  I found no artifacts in it, but there were two sample-sized pieces of charcoal plus a few flecked areas.  We are currently calling it a potential hearth, but it seems likely to be a post hole instead.  Hopefully Emily’s geochemical analysis will tell us!  Mike and Emily spent all day working on their feature – poor souls – and still are not done.
After finishing all the paperwork for my feature, I finished the level and the unit by excavating the southeast quad where I found two more bone fragments in the screen.  I am now officially done excavating!  Now it is time for a bunch of paperwork.  I ended the afternoon by filling out unit summary forms for 68E 153N and 69E 153N.  It was kind of interesting to look back and see everything we went through (both figuratively and literally).  Anna and Allysa spent today taking final CVS from every quad in the whole block and beginning to profile the east wall.  It rained a bit in the morning and shortly after lunch enough to force us to erect another tarp tent – this always seems to happen when we are excavating things that require extra special care (i.e., pelvis bone day).
Spec-ing kept us busy as yet another bout of rain and thunder rolled through.  I wanted to hide in the house with Mancos.  After dinner, we had a “discussion” about the additional readings on the chronology of the region by Nathan and briefly went over the topics to be covered on tomorrow’s exam (eep! but not enough to scare me into studying much yet… whoops?).  It has cooled down significantly now, and tea and hot chocolate were necessities this evening.

Day 38
July 15th
(Journal Entry from July 17th
3:57 p.m.
SNAP)
Today was profiling day.  Mike and Emily continued to work on their feature for the whole time at site.  Anna and Allysa were an unstoppable profiling machine, completing two full walls and two half walls by noon.  Molly and I teamed up to profile the west wall.
We left site at one o’clock and piled into the vans with our lunches to go to Vallican.  We met with Lola, Melissa, Robert Watt,  and a visiting couple at the site of the Sinixt occupation.  First, we checked out their reconstruction of a pithouse.  It was surreal to see and experience our housepit as it might have been 2500 years ago (with a few modernizing elements).  The inside is indeed pretty dark, though the high summer sun allowed our eyes to adjust quickly.  When you enter through the arched stairs, it is traditional to walk a full circle around the central fire pit before taking your place.  The floor is sand but hardened from the pressure of many feet with a circle of stones surrounding the central “hearth” which is currently a large metal woodstove.  Along the outside edge, there is a bench of large river cobbles cemented together and covered by wooden planks.  Behind the benches are raised cubbies for storing bags, sleeping, and children sitting during ceremonies.  There is also another wood stove equivalent to a peripheral fire hearth.  Thanks to its subterranean nature, the air temperature of the pithouse was very cool.  We also toured the housepits, sweat lodges, and burials at Vallican.  The occupation of the site was originally triggered by the destruction of the burials by the construction of a new road through the area.

The possible central fire hearth feature.
Unfortunately, my feature did not photograph well.

Mike and Emily painstakingly working on their feature. 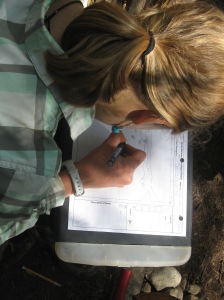 Everyone is happy to be completely finished with excavation! 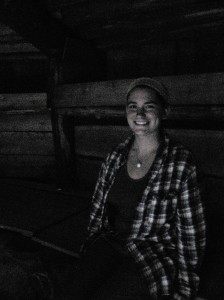 Emily inside the reconstructed pithouse. She is sitting on the bench and behind her are the cubbies.

Inside the pithouse looking towards the doorway.

The inside of the pithouse was impressively large.

Vallican’s reconstructed pithouse from the outside.