Day 31
July 8th
???
SNAP
Today in brief (sleeping was of pretty poor quality last night so it is bedtime): hot; SO MANY FLIES AND MOSQUITOES; back still hurts – maybe a pinched nerve? – minor relief from aspirin; another piece of charcoal; more flakes; annoying Stratum III-5/podzol in northeast quad of 68E 153N – may be a feature at this level or below but likely just disturbance; back to 69E 153N – big rocks were disappointingly not artifacts; Professor of Anthropology at Selkirk and activist, Lori Barkley, lectured on “truth,” maps, and the “extinct” Sinixt; yummy desserts – Lori brought cheesecake and Alissa made banana and berry ice cream; cougar still yowling; Housepit 8 finished!; Maddy and Max are in the field with bug rackets, creating a personal fireworks show while murdering the multitude of mosquitoes up here.

Day 32
July 9th
(Journal Entry from July 10th
2:33 p.m.
Nelson)
I dug in 69E 153N and found several flakes and a small rock that may or may not be carved.  It seems to have two curved lines and a dot.  At the right angle, the possible carving looks a bit like a person, somewhat like this: )*(. Nathan saw a black bear across the river in the morning and tried to show us but it disappeared into the trees before we could spy it.  However, we did see a bald eagle hanging out at the far side of the river at lunch.
I left site early along with Anna and Rachel to get dinner going as Marilyn James was coming to give a talk.  We made goulash based off of my grandmother’s recipe, a salad, and watermelon.  Marilyn is a rather interesting person.  She is one of the relatively few Sinixt living in the Slocan area and a very outspoken activist for the land and the existence of her people.  She has some very strong opinions, calling herself the only Sinixt truly standing for her people.  But she is a gifted storyteller.
According to Marilyn, the Sinixt language is the language of water, and all water is female, making the Sinixt a matriarchal society.  There are two overarching laws.  The law of the land is the highest, telling the people how to treat the land that nourishes them.  Just below that is the law of the women.  Women run the household and the community; men are just “honored guests” who must obey the rules and commands of the women.  The Sinixt also view the women (and men) as stewards of the land, taking care of it for coming generations.
After dinner, Marilyn told us the story of the creation of the Columbia River.  While I could never do her telling of the story justice, the essential plot goes like this: Coyote fell in love with a beautiful woman, Rain, who he snared into returning his feelings by entrancing her with his song.  Then he met Ocean, Rain’s equally beautiful cousin, whom he also fell in love with, breaking Rain’s heart.  Rain threw her heart as far from her as possible.  To prove that he still loved Rain, Coyote created the Columbia River and all the animals who live near it to tell Rain every day how much he loves her.  He also created the Sinixt people to praise her and further express his love.  Then, because Coyote can be an idiot as well as a creator of good things, he went to hang out with Ocean, but promised to return one day to Rain’s heart place and make everything right.  The Sinixt are still praying and waiting for that day.
My back has been feeling mostly better finally.  I had a conversation last night with Maddy as I was going to the outhouse in the middle of the night which turned out to be quite funny as she was sleep-talking! 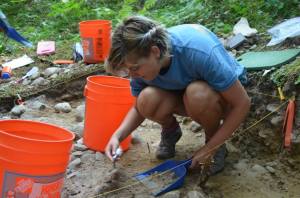 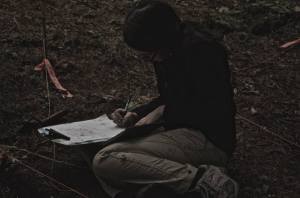 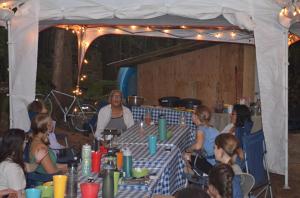 Marilyn James speaking to us about her views on the status of the Sinixt and the misuse of the land.
Photo Credit: Alissa 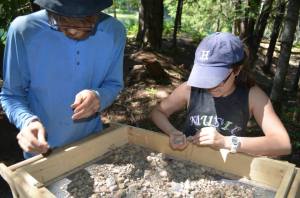 Mike and I spend some time at the screen, shifting through many pebbles to look for flakes and bone fragments.
Photo Credit: Alissa 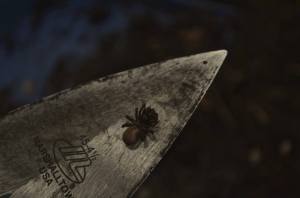 Since I don’t have any pictures of the big wildlife, here’s a small visitor to Housepit 7!
Photo Credit: Mike