Day 19
June 26th
???
SNAP
Today was a pretty exciting day for Unit 68E 153N.  I worked on Stratum III Level 2 and found several flakes.  First, and most excitingly, I found a quartzite flake about 1 cm x 2 cm in the SW quad! Quartzite comes from Kettle Falls in Washington, and we sometimes find circular scrapers (or perhaps decorative ornaments) made from it.
Continued on June 27th
My second flake find was in the NW quad.  In my screen, I found one flake and two maybe flakes.  I also briefly thought I might have found a hearth, but that didn’t pan out (from post-dig Mariah: it may have actually been part of a feature that I uncovered later but we didn’t know it at the time).  One more flake appeared in my SE quad screen.  Professor Tom Jones arrived about 3:30 p.m..  It was his first time at the site, even though he is the other archaeology professor at Hamilton.  When he arrived, we gave him a tour of the site which doubled as updates on the blocks for the rest of us.
After specing in, I trekked down to the river with Grace and Petra to cool off from the ridiculously hot weather.  The water temperature was still cold but much more bearable than before.  We paddled our floaties out to the dock, discovering that the current was stronger than usual.  When Max joined us, we went down to the log and eventually decided to float down the river to the site.  By then, the sun was starting to set behind the mountains, so my float on the kickboard was a little chilly but still nice.  We had to awkwardly paddle over the sides of our rafts towards the end as we were late for dinner.  When we finally landed by the site, we were greeted by a family with a St. Bernard and a Jack Russell Terrier (quite the contrast) as well as a swarm of mosquitoes which we battled the whole way back to camp.  Poor Petra had left her shoes at the beach so she had to hobble slowly down the sandy (and rocky) Rail Trail while the rest of us speed-walked or ran to escape Mosquito Hell.
Oh! A group of Sinixt people also visited yesterday to offer a prayer over the site. Along with praying in Salish and English, four of them offered a song with the drum, and we all gave a tobacco offering to the ancestors.  The ceremony felt very important and powerful because it explained to the ancestors that we are digging for good purposes, for the continuation and understanding of the Sinixt culture.  They also left us some smoked salmon which we offered portions of to the land and the ancestors as well.  I added in a few huckleberries which are fairly abundant at the site now too.

Day 20
June 27th
10:47 a.m.
On the road to Nelson
We just visited the DkQi17 site on the other side of the river.  It is about a thirty minute drive from camp because we have to go into Slocan proper to cross the river and then head back down.  The trek into the site from our parking spot is a bit rougher than at DkQi1, walking five to ten minutes on mostly overgrown two-track.  Most of us layered up in rain gear to fend off the mosquitoes which created some massive sweat as it is another sweltering day, even in the shade of the trees.  DkQi17 has two “villages,” each with an initial house which the others grew up around.  We also saw an outlier housepit which may have been a shaman’s house or a women’s menstruation house.  While walking along the river, a bald eagle flew by – the first that I have seen here!  Now we are on our way to Nelson for our weekly laundry and shopping trip.
5:45 p.m.
SNAP
HOT HOT HOT!  Nelson was sweltering today.  You didn’t want to be outdoors for long at all.  But that did not deter me from contributing to the well-being of several of Nelson’s small businesses.  First, I bought a flow-y, sheer, black top at the consignment shop next door to the laundromat.  Then I bought a nectarine at Ellison’s, a little health food-conscious market, for a snack as we were pretty late to laundry because of traffic and, therefore, late to lunch.  For lunch, Allysa, Rachel, Petra, and I went to Allysa’s favorite sushi place.  Boring old me ordered California Rolls, as usual, because I don’t like the texture of raw fish.  After lunch, we unsuccessfully searched for Converse for Petra and then enjoyed some ice cream.  Rachel and I headed off to a used bookstore aptly named Packrat Annie’s.  I purchased a Dragonrider’s of Pern book that I have yet to read!  After enjoying the air conditioning and the old book smell for a while, I journeyed to the Salvation Army where I found a long, brightly-colored skirt (like I really need more skirts…).
Also, I was super excited to hear about the Supreme Court decision on gay marriage this morning! Love is love, no matter the genders. 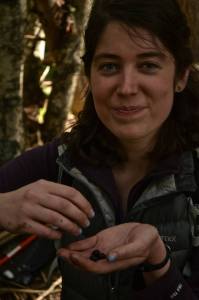 The Slocan River – from the other side! 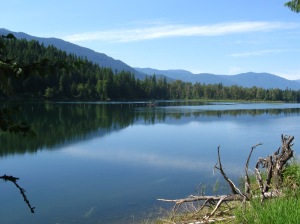 From higher up on the DkQi17 side 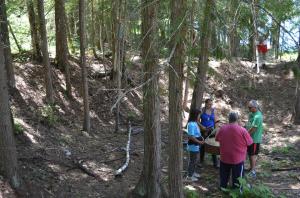 Offering tobacco and prayers to the ancestors at Housepit 6
Photo credit: Alissa