Day 7
June 13th
10:41 p.m.
SNAP
I got a tattoo today! Okay, not a real one.  Grace brought temporary tattoos of dinosaurs for the group as a joke on the response we often get when we say we’re archaeology students (“So you dig up dinosaurs…”).  I pasted a stegosaurus on my left hip.  I messed up on the first try, leaving the plastic on against my skin, so now I have a slightly marred version attached to my journal.  Petra decorated her forearm with a brontosaurus and calls it her Dark Mark.
Anyways, Saturdays are typically dedicated to a trip into Nelson, about 45 minutes away, and that’s exactly what happened today.  We got to sleep in, and then we all piled into the jitney and the van with our dirty laundry.  To get that over with, our first stop was the laundromat.  Nearly everyone except me (poor little Dumbphone) spent the time between loads talking to their family and friends with the appearance of service and Wi-fi.  Then we went to a nice restaurant called Jackson’s Hole for lunch where I learned that what most Americans call “sweet potato fries” are “yam fries” in Canada.
After lunch, we were set free to explore Nelson while the professors and T.A.s went food shopping.  Petra, Anna, and I went with Allysa for a personalized tour of the town by our local girl.  We stopped at Wal-mart first for some essentials like tissues and Kinder bars (KINDER!… sorry, I have an obsession). Then we explored many of the artsy, hippie-ish boutiques on the main drag, Baker Street.  I returned empty-handed but not for a lack of cool stuff.
Back at camp, I decided to reorganize my tent, which turned out to mean completely flipping it around.  Dinner was hamburgers and LEFTOVERS (an important staple of any diet).  Afterwards, we enjoyed a campfire with the whole group, and I just realized that I failed to eat a s’more or even a marshmallow tonight. Gasp!  Well, off to bed.  Hopefully, I won’t wake-up too disoriented by my new configuration.

“You’ll find us chasing the sun.” – “Chasing the Sun”, The Wanted
This song got stuck in my head today (of course, just the one line), because that feels like most of what I’ve been doing today.  Despite a very cold night, the sun has risen bright and warm today, reaching well into the 70s, if not 80s, in the field.  However, down at the cabin, the trees keep things much cooler with their shade.  I decided to wear my “town dress” (my one sundress) today since we are going to some live music after dinner.  This was a great decision up at the field, but at the cabin, I ended up putting on a sweatshirt to combat the chill.  This afternoon found me reading at the campfire down there and moving my chair every few minutes as the sunny areas shifted – chasing the sun.
I also took my second shower this morning.  I think this was the longest I have ever been between showers: 4 days, which is apparently rather unimpressive by the records of some of my tripmates which reach into the teens (yes, we have talked about this.  Welcome to camp life with college students).  My review on the Dr. Bronner’s soap so far: not very good for shampoo as it doesn’t lather well, and I think it’s drying my skin out pretty badly but that could be just the overabundance of bug spray I wear everyday (or both).
Tonight, I will be the first of the students to be head chef. Eep! I am trying out a recipe for Summer Vegetable Soup that I have never made before. Wish me luck!

9:55 p.m.
SNAP
We saw a band called Dirty Grace at a restaurant called Sleep Is For Sissies. Amazing! I also had a very good orange ginger cheesecake there which tasted like Christmas.
I have breakfast duty at 6:45 a.m. tomorrow so I need to sleep. More on tonight in tomorrow’s entry! 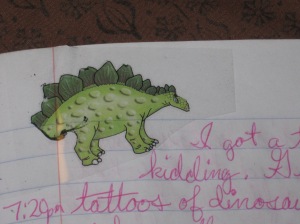 The oops! version of my tattoo. Poor guy lost his tail in the struggle. 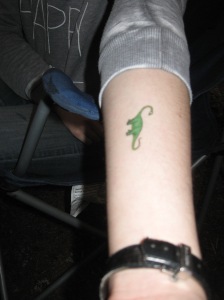 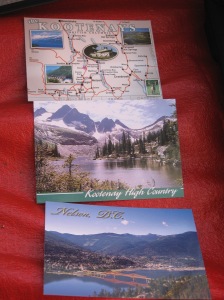 Oops! Forgot that I did get something in Nelson: postcards! 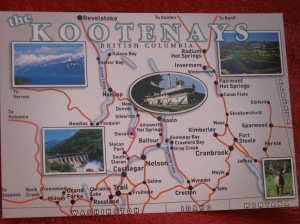 Map of the Kootenay region; I circled Slocan in pink if you can find it (hint: it’s near the center) 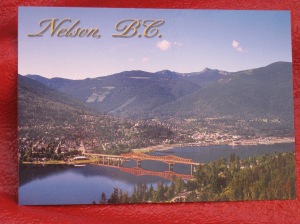 Nelson: where we interact with civilization once a week 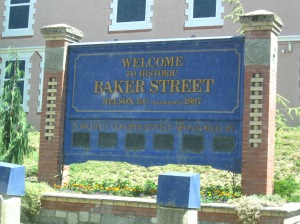 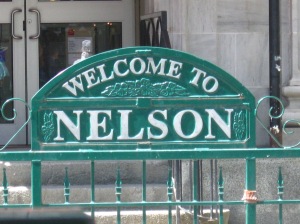